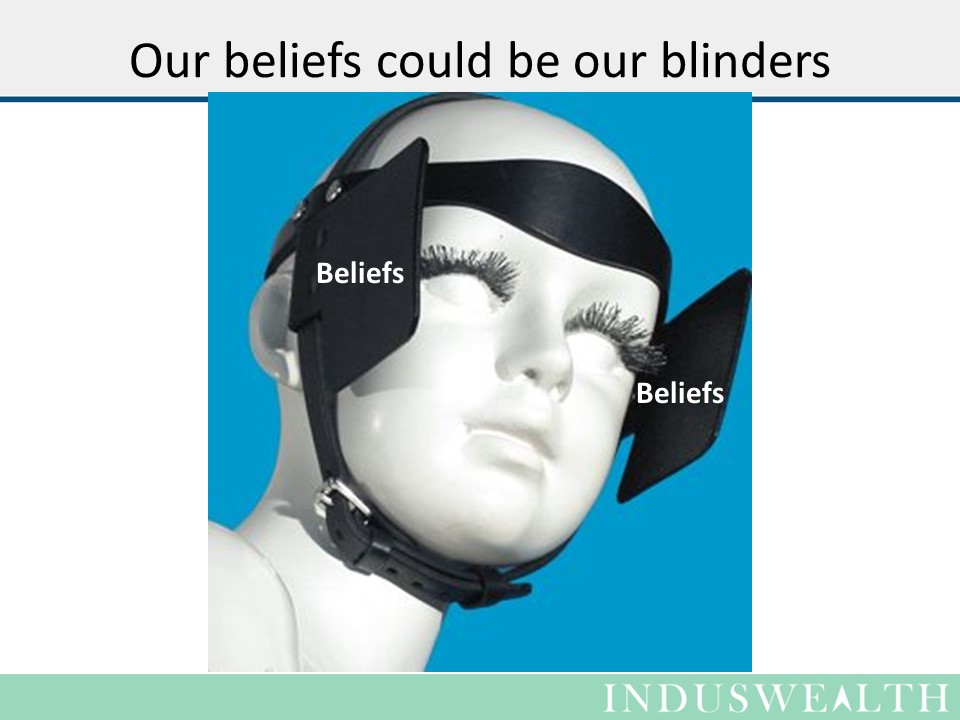 I had a couple of meetings with a group of people, who got interested in trading in equities. They reached out to see if they could leverage some of our research ideas. During the conversations I asked about the profitability of their trading operations. They believed that they were doing very well. When they sent their transaction data, it was easy to figure out that the trades lost to both bank rate and Index, i.e., they were better off investing in an index fund or putting their money in a bank rather than trading.

What was interesting for me was that they were very keen on generating profits but their entire operation was based on their belief that they were good traders and that they were making money. They did not put in any effort to benchmark their returns. They almost refused to understand the data when it was presented to them. It seemed like their belief in their ability to make money was a blinder, which made it difficult to see outcomes more objectively.

Similar beliefs tend to impact a lot of people in their investments.

Many Indians have large investments in gold, especially as jewelry, with the belief that this has given or will give above average return. They don’t kept score about their expected rate of return and the actual return. There is no attempt to see if their belief is being validated by data. The way I see it, if one calls something an investment then one should have an expected return and one should review it periodically, at least once a year. Or one could say that they are passionate about gold and keep buying it – then it is not an investment and one need not track it.

Similarly there is a blind belief that investment in real-estate has and will give above average returns. Usually there isn’t an expected return one has for that investment. Typical reply is “current price is much higher than the purchase price” so it is a great investment. If value of a property quadrupled over a 20 year period then it has generated a 7.2% return, which is decent but not great. If someone said that the purchase was for their family residence, to get a sense of ownership, and for building memories that are invaluable then the question of return and calculations makes little sense. But if one is treating this as an investment then it is important that returns are looked at in an objective way.  It is also not that most people are incapable of making these return calculations. The thing of concern is their unwillingness to try to find out the return and continuing to believe that the return has been great.

Most Indians have some investment in gold and investing in real-estate is their first preference. If most people are doing the same thing then statistically all of them cannot have an above average return. Some of these investments are driven by beliefs without being backed up by data.

A person who would be appalled if he were treated based on his doctors’ beliefs rather than based on examination/data. But the same person will be unwilling to look at objective criteria to evaluate returns on his investment and will continue to believe that the returns are great. I think that investors will be best served by verifying their beliefs.

The mantra should be “believe but verify”.