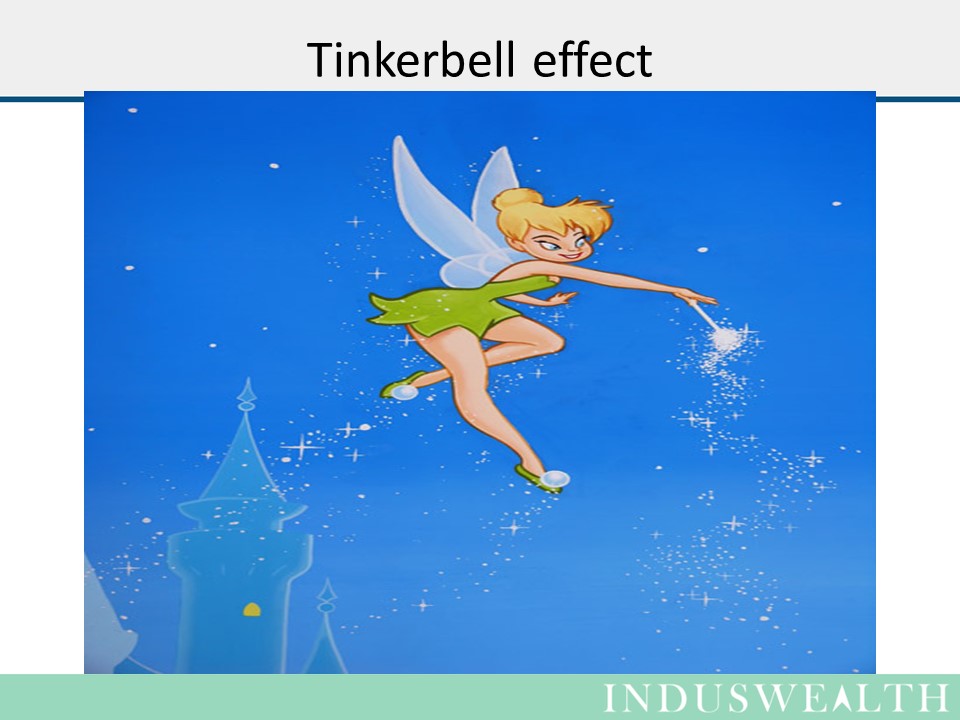 Tinkerbell effect is an expression describing things that are thought to exist only because people believe in them. The effect is named after Tinker Bell, the fairy in the play Peter Pan, who is revived from near death by the belief of the audience.

Beliefs are extremely powerful and their effect is best demonstrated in medical research as placebo effect, patients taking “sugar pills” have significant recovery because they believe that the “medicine” they are taking is helping them.

Some interesting examples of placebo effect from a WRF article

This shows that our beliefs could have a great impact on outcomes that have something to do with ourselves. Positive/wishful thinking can help in positive outcomes – so believing that one is getting better, losing weight, that one can accomplish a stretch goal can actually help the outcome.

Directing belief and positivity towards oneself could help, but the same may not work when directed outwards, especially where ones actions have very little influence on the outcome, for instance– my favorite team will win the match, I will win that lottery, the property/stock price will go up etc. Here is an interesting article about Tinkerbell effect and current US foreign policy.

Tinkerbell effect in investing (people believing that prices will continue to appreciate) has resulted in various booms which invariably lead to crashes, 2008 crash in home prices, 2000 dot com crash etc.

A glaring instance of Tinkerbell effect was Irving Fisher’s 1929 conclusion that “stock prices have reached what looks like a permanently high plateau.” This was just a few weeks before the 1929 stock market crash and the onset of the Great Depression.

Investing is an activity which inherently deals with uncertainty, here one should avoid wishful thinking and look for evidence & rationale for the outcomes that one is expecting. Investors will be best served if they are able to differentiate between what they “know” (based on analysis of underlying facts) and what they “believe”. Investors should be looking for what do they know that can be demonstrated to be true; and what do they believe that can be demonstrated to be untrue.

Ability to differentiate  between “knowing” and “believing”  does not guarantee investment success (especially in the short run) , but it provides invaluable feedback to help refine the “investment process” that could assist in the long term success.