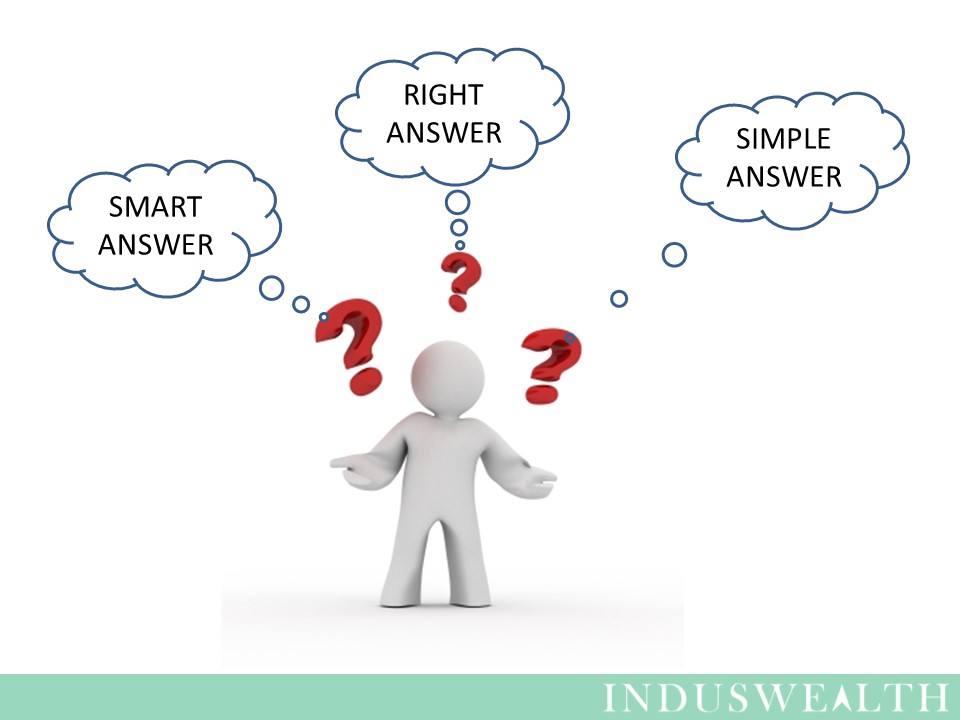 Recently I met up with a friend, he had closed a large deal and had significant amount of money that he could invest. He asked me what was the best he could do with the money with an investment horizon was over 5 years.

I suggested that he should invest this money in an Index over a 36-month period and hold on to the investments for a minimum 5-year period.

He gave me a puzzled look and seemed to think that I was kidding him. I tried to walk him though the logic. I said that based on historical data – if one followed this strategy then:

This means that even if one happened to invest in the worst time, then one would realize at least 9.5% return.

In summary, this approach has a reasonable statistical chance of generating better than bank return.

He did not seem convinced, may be because the plan was very simple.

In my conversations with various people, I find that there are 2 kinds of investment answers most people are looking for – “smart answer” or a “right answer”.

By smart answer I mean an answer that seems complex enough to fit their perception of the challenge – for instance an investment advice that is convoluted and complex sounding. But for a lot of real life problems the answers are simple but they are not easy to implement. For instance, to stay fit or lose weight one must work out more and be mindful of the calorie intake. This is simple but not easy, else most of the people would be fitter. One can see the appeal of crash diets, special weight-loss programs which are complex, costly and sound smart but they are ineffective in the long run.

People looking for the “right answer” are looking for a prediction.  The question I hear most often is which is the stock which will give fabulous returns or a prediction about direction of the market. I try and quote Larry Summers line about the economy which goes something like, “I don’t know what’s going to happen, but anyone who says he knows what will happen doesn’t know what he’s talking about.” Reconciling with this is tough as various newspapers, TV channels are having “experts” constantly making predictions. But most people don’t realize that when these predictions were tracked, most of them turned out to be incorrect.

People desire a deterministic approach for investments – whereas investments are best approached in a more statistical fashion. Though there is mathematics about calculating the value of a company and hence the price of a stock – there are many assumptions in these calculations. Future will take one of the many paths possible for it to take – a person who is making an investment should consider various paths and their probabilities before making an investment decision.

For DIY investors who have limited time to for research – making systematic investments in an Index fund over a period of time and holding these investments for the long term could be one of the best approaches to get a reasonable return on their investments.

I believe simple answers could be more effective than the smart or right answers.